We tried to connect our low EMF desk to the computer by means of a good quality USB extension and an USB hub. We needed at least three USB ports near the desk, one for the mouse, one for the keyboard and another one for removable USB devices like a USB flash memory or a digital camera. We didn't expect such amount of electromagnetic radiation from the little USB hub.

We carefully chose the USB hub to have less electromagnetic radiation near the desk, so we chose one with only 4 USB ports, that doesn't need its own power supply to work, or else we would have had also a switching power supply near the desk.

But even the simple 4 port, direct powered, USB hub, revelead to be a source of extremely harmful electromagnetic fields, much more than a bunch of USB cables. 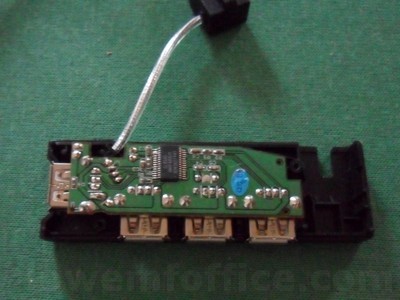 A USB hubs contains a small electronic circuit with some integrated components that transform multiple USB signals into a single signal and viceversa. This small circuit is capable of emitting as much electromagnetic radiation as an entire switching power supply, or an inverter for a large set of fluorescent tubes.

We started to feel it after few minutes and it caused us a terrible state of pain, migrains, headache, which took two days to fade.

We tried to apply some shielding to it, and noticed that with the shielding the effects were lower, but just a couple of layers of aluminum tape weren't enough, maybe if the device was enclosed in a thick metal box, with very small apertures for the wires, the shielding would be good enough.

After two days we had to discard totally this solution. We tried two different brands and models of USB hubs, both with 4 ports and without separate power supply, the second one was noticeably better than the first, even if they both had just plastic covers and no shielding. However the amount of electromagnetic emissions of these devices is dangerously high.

Yet another time we ask how is this possible, how can industries that make these products not to notice the huge electromagnetic radiation coming from these products.

USB hubs are designed to be used very near to oneself, to be placed on the table, to be easily attached and detached when needed. While we are working at the computer with an active USB hub on our desk, we are irradiated by an amount of electromagnetic radiation coming from the small hub's circuit. This radiation is similar to that of some cell phones. With prolonged exposure this radiation causes many serious health problems, several types of cancer, and lots of other subtle problems to a human organism.

We can't do anything else but warning people to be very careful, to avoid these devices as more as possible, and hope that the industries start to invest more in the research for better devices, with much lower electromagnetic radiation.