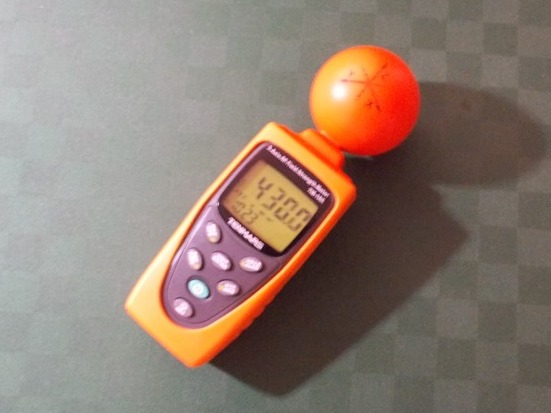 In this article we review the radiofrequency electromagnetic meter Tenmars TM-195.

The display does not have a good reading angle. It is only easy to read it from the direction perpendicular to the display. If it is viewed from an angle it is impossible to read. This makes it difficult to read the values when the instrument is placed on a table in a vertical position. The display is also a passive LCD so the bright light from the front renders it unreadable.

The measurement unit changes by itself during a measurement. For example if the instrument is showing a value in uW/m2 and the value goes beyond 1999 units, the instruments switches to the mW/m2 unit and so suddenly the value displayed becomes 1000 times lower, for example 2.0. This is annoying and creates problems, one can even think that the value has dropped so much for a while, but instead it has gone up.

The label of the current unit is too small and cannot be easily read from a distance. If the measurement unit were not able to change alone this wouldn't be a problem, but the instrument changes unit by itself.

The AVG mode should produce an average of the instantaneous values collected by the instrument, but the number of values taken for calculating the average is unknown. It is not written in the small user guide, and neither in other places. It could get two successive values, or three, or ten, it isn't specified. When the AVG mode is activated, the time indicator gets replaced by an indicator of the minutes and seconds that have passed since the activation of the AVG mode. Does it mean that the average is calculated over all the values collected in that time interval, which means from the activation of the AVG until the current time ? It is not explained. In the user manual there is a drawing that shows a curve for the AVG value that varies quite a lot with time. So it seems that the average is calculated over a fixed number of values collected in the previous instants, but this is not explained anywhere, neither in the little manual nor on the Tenmars website.

The only information we have is that the instrument takes three measures every two seconds, which means that the frequency of the measurement is 1.5 Hz, so the time between two consecutive measures is 0.667 s. This rate is fixed. Instead the instrument should have a variable sampling rate, the user should be able to set a lower or higher rate.

The user guide is badly translated into English. For example, the instructions to set the date and time of the clock of the instrument say to press a button and another. It seems that the user has to press the first button and then the second. Instead the buttons must be pressed simultaneously, so the instruction should have been written in a different way, for example ?press button A and button B together? or ?press A and B at the same time?. Clearly the translators didn't try the instrument at all.

In conclusion this instrument is not useful for detecting most of the electromagnetic fields and radiation sources indoor, in homes or offices. It may be useful to evaluate the electromagnetic pollution outdoor, due to the cellphone towers. Other people have shown that this instrument is also too slow to show the pulses generated by the "smart meters", i.e. the electric power meters that communicate via wireless like big cellphones, see this video.