In this article we examine the structure of a small computer network based on Plastic Optical Fiber, which has huge advantages in terms of reduction of electromagnetic radiation.

The only way to avoid the electromagnetic emissions of the external media converters and related cables and power adapters is to use POF network cards which are installed inside the computer case, so in the following we consider only networks of desktop computers each of which has at least one POF network card.

The first example of network is a simple LAN that connects several computers to each other. The network has a star layout, at the center there is a LAN switch that has one port for each computer. The cables start from the center and go to every computer. If we have a Plastic Optical Fiber switch then the network is composed as follows: 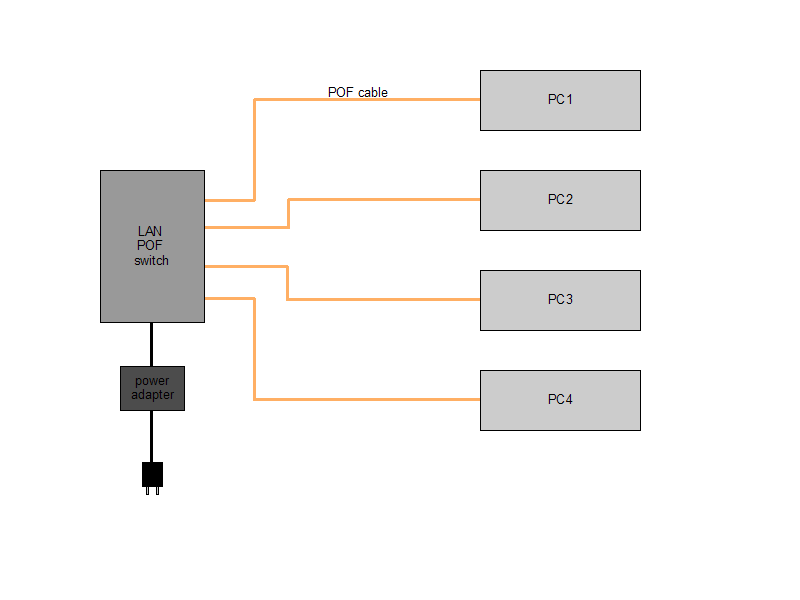 There are already POF switches available on the market but they have 8 ports or more, and are quite expensive. If we need just 4 ports or less we can use POF media converters attached to a traditional LAN switch with RJ45 ports. In this case, at the network center we would have many media converters, each of which needs to be powered. In a first solution we could use the small power adapters, one for each media converter, all attached to a multiple socket. 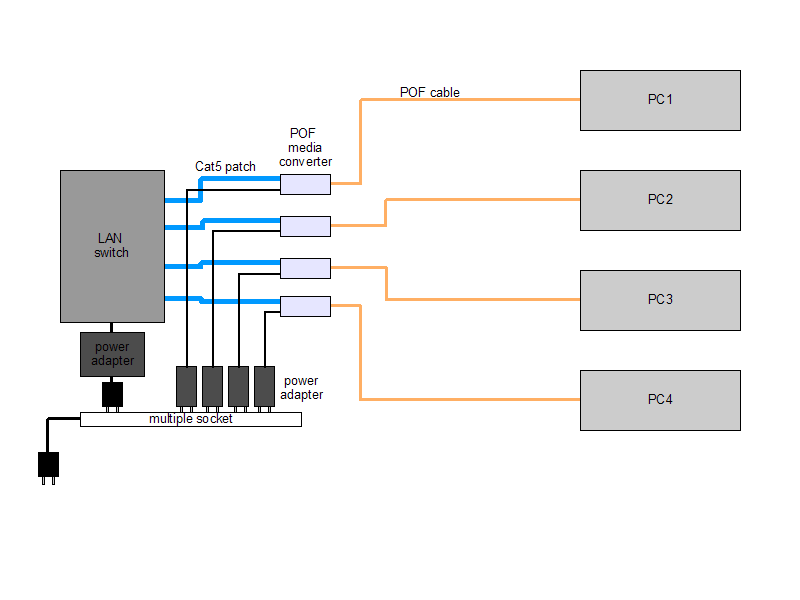 Fig.2 POF network with media converters at the center

The presence of many small power adapters on the same AC socket could generate too much electromagnetic noise into the mains. The noise in the mains may be reduced with an AC filter on the multiple socket. The power adapters generate also some radiation all around. A better solution is to have a single power supply that provides the power to all the media converters located at the network center. Since the media converters use very little electric power such power supply is not too large. 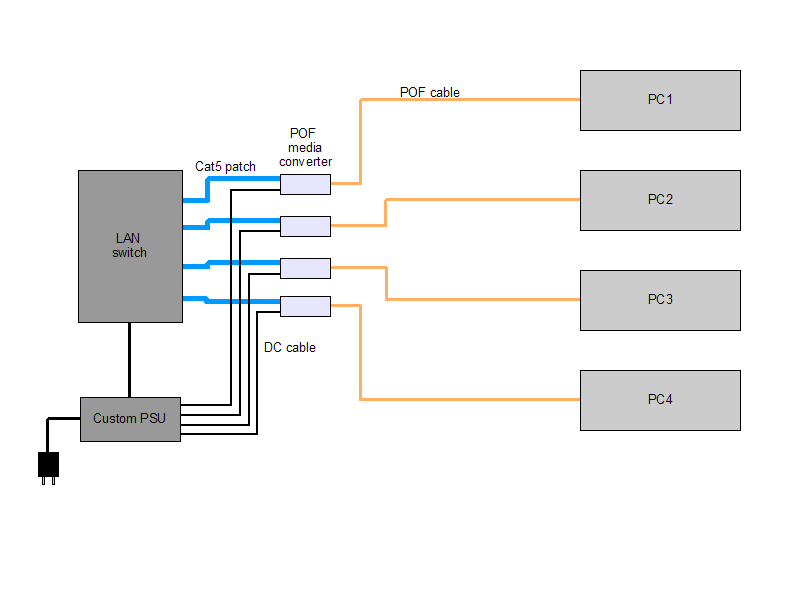 Instead of a LAN switch, the center of the network could contain a simple Ethernet hub. The choice between a hub, a switch or possibly a router depends on the number of terminals of the network, and it is the same problem of Ethernet based on UTP cables.

The center of the network could be connected to an ADSL modem that gives access to the external internet by means of an ADSL. In this way the electromagnetic radiation of the ADSL would be limited to the modem, and not carried to the computers, which may be located in other rooms.

We suppose that the ADSL modem is also a router, or else we have to connect the ADSL modem to a separate router, and the complexity of the system grows. This is a practical solution for up to 4 computers that need to share the same ADSL. 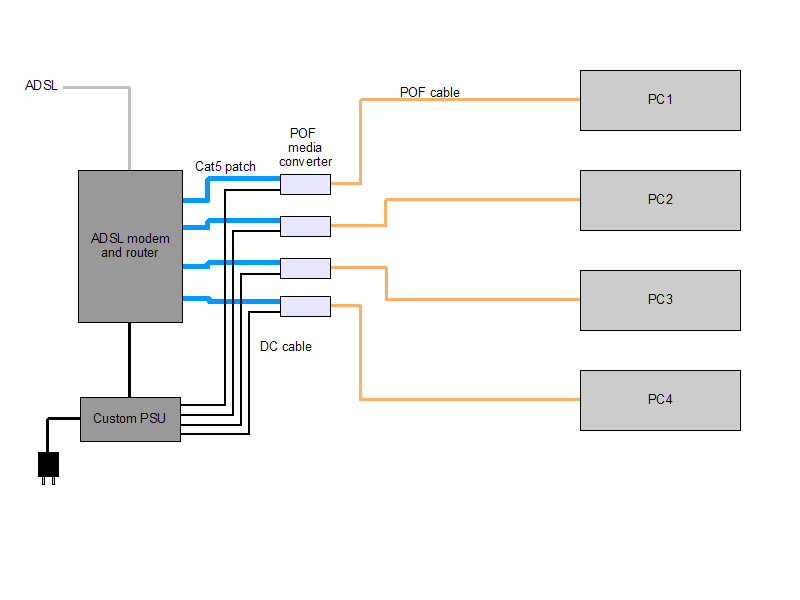 Fig.4 POF network with ADSL modem-router at its center

In most cases the ADSL will also provide the traditional analog phone, and with a suitable phone call switch each desk can be provided with an analog phone too. To have also the analog phone there must be an ADSL splitter filter. The phone wires have to be installed for each terminal. 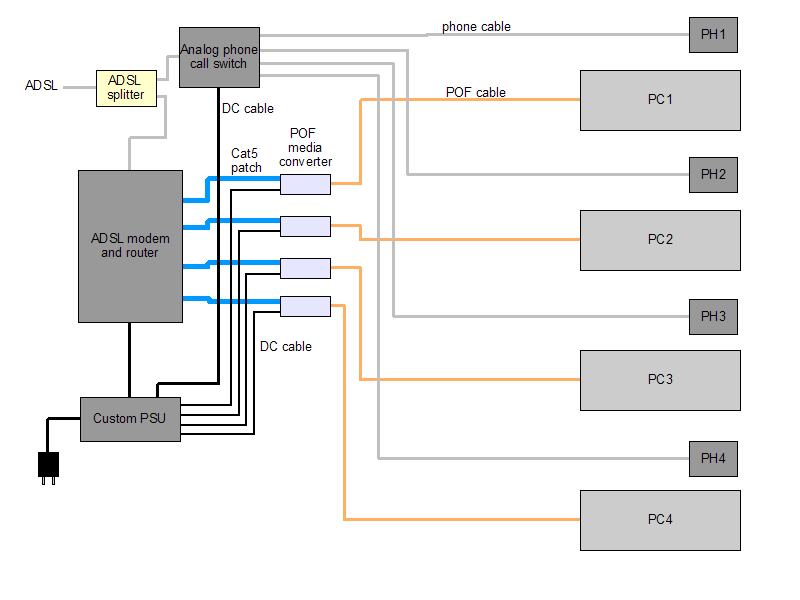 Fig.5 POF network with ADSL modem-router at its center and analog phone

If we can use a phone system that works completely on the computer network, the phone cables would not be necessary, and the phone terminals would connect to the computer.

For a better protection from EMR, and also for hiding all the devices and cables, a suitable enclosure for the network center should be used. This enclosure would contain the ADSL modem and its power adapter, the network router and its power adapter, the POF converters and their power adapters, and the patch cables that connect the POF converters to the router. Ideally such enclosure would have just the ADSL wire entering in it, the POF cables exiting from it, and a single power cord.

Large offices with more than 4 computers are probably served by an optical fiber internet connection, so the bandwidth is much larger, there is no ADSL modem, and the fiber optic line can be connected to a local POF switch.